Vegan Princess in an Omni Kingdom

Adventures of a vegan girl living in an omni world.

When Cat of The Verdant Life suggested that we start a food swap with other vegan food bloggers across the country, I jumped right on that opportunity. I had watched other bloggers in the past participate in these types of projects and it seemed like a lot of fun.

I sent a box to Karen of Seattle Veg Coach but failed to take a picture of any of the contents, so I will have to let her show you over on her blog.

I received a box from Jen (and her 7 year old son Otis) from the Suburban Vegan Meal Group blog.

The box was full of all kinds of goodies, from Sweet and Sara marshmallows, to homemade cookies to the fixings for cajun potato wedges, right down to the potatoes! The box also included salsa from Brooklyn Salsa Company, spicy ketchup, plantain chips, a peanut butter cookie Larabar, a True Bar, and flower seeds.

She also baked homemade cookies, which unfortunately had become a little smaller during the journey, but were no less delicious. 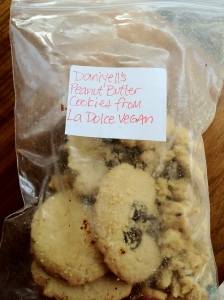 Cinnamon pecan marshmallows from Sweet and Sara were the one flavor that I hadn’t tried yet (and I may or may not have grabbed a fork to dig in before I had actually unpacked the rest of the box. I am neither confirming nor denying such a thing). 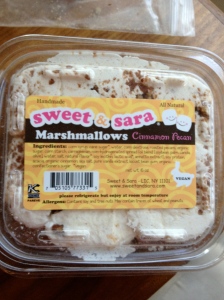 The best part had to be the artwork drawn by Otis. The next generation of activists at work! 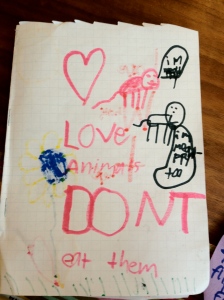 Front cover of the card.

Inside of the card.

Thanks Jen and Otis, I love my box!

To see what others participating in this project received, head over to the Vegan Swap Reveal post at The Verdant Life.

Do you want to participate in May’s swap? Head over to the sign up page and join us!

I am really behind on blogging all of the great dinners and new products I have tried in the past month or so, but I promise to get back to it and tell you all about it. To start, I want to tell you about the dinner my friend Megan and I had at Fare Start on March 1, 2012.

Fare Start is a non profit restaurant dedicated to helping people make a new start in their lives by training them to work in food service through a 16 week training program. Fare Start also runs a restaurant in downtown Seattle, and once a week they bring in a guest chef from a restaurant around Seattle to work with the students. March 1st they brought in Chef Makini Howell from Plum Bistro, marking the first time they had a vegan chef.

You can see in this (slightly blurry) photo the menu they had that night. This entire menu was prepared by Chef Howell with help from the students in the program, and it was as she said, the first time she had prepared her food without one of her own sou-chefs in the kitchen. As avid Plum Bistro fans, Megan and I could only tell that different kitchen staff were preparing the dishes on one dish (mac and yease) and it was only because we have had that dish more times than we would like to admit.

First course was mac and yease, a spicy mac and cheese that Plum Bistro is famous for. It was a bit oilier than normal (and this is a pretty oily dish normally) but really tasty as always.

Second course was grilled chimichirri seitan steaks and tofu steaks with asparagus and purple mashed potatoes. This was some of the best grilled tofu I have ever had. Normally I am not a big fan of eating chunks of tofu, but the texture was perfect on this and the sauce they placed on it had the right amount of bite to it, slightly salty with a touch of sweetness. The seitan on the other hand was a bit too oily, it oozed puddles of oil with every cut of the knife. It had a nice texture to it though, and would probably be the dish that I would suggest to my omni friends and family members as it mimics the texture of meat just enough while still being interesting enough as a plant based food on its own, which is what I strive for when picking menu items for non-vegans. 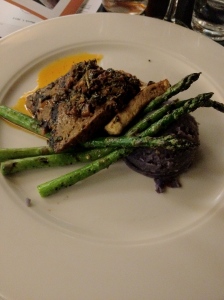 Dessert was a gluten free brownie with raspberries and non dairy ice cream. It was served warm and was really tasty. I could over hear some of the other diners around us, and they were in disbelief that it was gluten free and vegan, which is food activism at work, in my opinion. While several of the diners in attendance were vegan like Megan and I, many more were not, and I am hoping that they were at least convinced that vegan dining can be not only satiating, but satisfying.

Over all the evening was a success, the food was exactly what I have come to expect from Plum Bistro, all of the proceeds went to charity, which made me feel a bit less guilty indulging. I can only hope that Fare Start will do more vegan guest chef nights in the future.